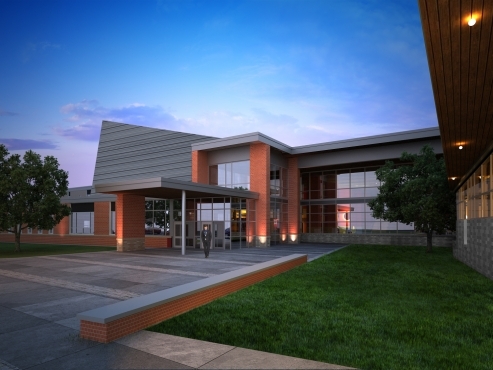 CTA Construction of Waltham, Mass., is starting work on the new regional high school in Townsend, Mass., as school lets out for the summer.

As summer vacation begins for teachers and students, CTA Construction’s crews will get to work on the new 180,530-square-foot North Middlesex Regional High School. The two-story, brick-faced school will rise adjacent to its predecessor, which is slated to be demolished after completion of the new facility.

CTA Construction was the only pre-qualified contractor to submit a bid under the estimated construction budget of $68 million. The district’s School Building Committee voted unanimously June 1 to award the contract to CTA.

“CTA is pleased to join with the North Middlesex community on this exciting and important building project. We take pride in constructing high quality schools that meet the needs of generations of future students, while also being mindful that education will continue in the facility next door during the construction period. CTA has extensive experience in managing construction projects that minimize disruption while delivering a high-quality, high-value facility,” said Jeff Hazelwood, a project executive with Waltham-based CTA, online at http://www.ctaconstruction.com.

The existing school, built in 1959 and expanded in 1971, has deficient building systems, including mechanical, electrical, plumbing and the structure’s exterior. The new facility will serve 870 students in grades 9 through 12.

The project architect is Symmes Maini & McKee Associates of Cambridge and the owner’s project manager is Heery International, based locally in Burlington.

CTA is a leading construction manager in the building of academic facilities in Massachusetts. In the last 15 years, CTA has undertaken more than $1 billion in projects, including construction of the Dracut High School, Beverly High School and the Marshall Simonds Middle School in Burlington.

CTA is an award-winning builder with a track record of high customer satisfaction, earning a ranking of 93 out of 100 on client surveys filed with the state Division of Capital Asset Management.