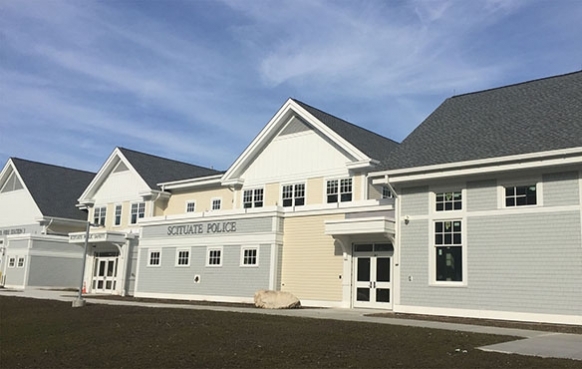 Scituate, MA (May 11, 2017) – Public officials and fire, police, and EMS professionals from Scituate came together with CTA Construction for the ribbon cutting of the town’s new public safety building today. The formal opening of the building comes 17 months after the contract was awarded to CTA Construction in the hopes of consolidating all of Scituate’s emergency response resources within one building to improve coordination and response times. With the building now complete, emergency responders have begun moving into the new joint police and fire department facility.

The new 28,818 square foot building occupies a 6-acre site along Route 3 in Scituate. A unique feature of the facility is its mix of shared and separate operational areas for the police and fire departments. Unified operational centers include both a joint police and fire dispatch center and a shared emergency operations center. These combined emergency functions will help better coordinate police and fire unit response times in the northern and western sections of Scituate.

“This project represents the future of public safety in Scituate, and we’re proud to have delivered it on time and within budget,” said CTA Construction Vice President Jeff Hazelwood. “It was a great collaborative effort between CTA, architect Dore & Whittier, owners’ project manager Vertex, and the Town of Scituate which will save taxpayers money and improve emergency response times throughout the town.”

The Scituate joint-department public safety building is part of a growing national trend in how new facilities are managed for police and fire departments. The initial impetus to create shared complexes came due to financial pressures on cities and towns following the Great Recession. However, the drive to save taxpayer dollars has actually improved responses to 911 calls as well, and led to better all-around cooperation between local police and fire departments. With the completion of this facility, Scituate too will see the benefits now enjoyed by many cities and towns across the country that have adopted this new model for their emergency services.

While catering to the shared responsibilities of the Scituate police and fire departments, the new complex also caters to the unique individual needs of each. The building features 3 bays to accommodate fire department vehicles. Meanwhile, the police benefit from new detention and prisoner processing areas, which are connected to police bays via a sally port to assure secure prisoner transfer.

In addition, the building boasts new administrative offices and public records storage, as well as new training areas and a community meeting room. The facility also contains locker rooms and a fitness area for use of both police officers and fire crews.