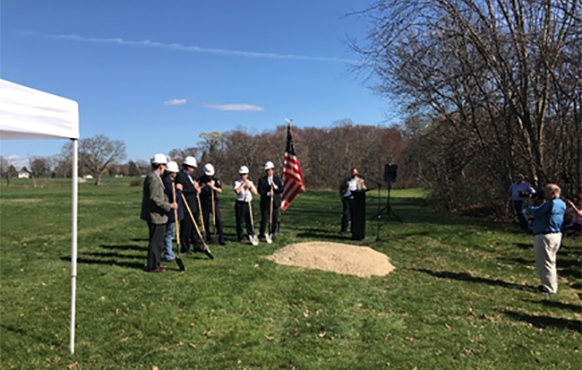 Southborough, Mass. (May 18, 2018) –CTA Construction announced today that it has been chosen by the Town of Southborough to construct a new $15.125 million Public Safety Complex to house the town’s police and fire departments. The project, which will be built on six acres of land purchased from the Southborough Golf Club, recently broke ground in a ceremony with local officials and CTA Construction leadership in attendance. Construction is expected to begin immediately and last for approximately 14 months.

“We’re very excited to get to work on this project, which will improve response times and emergency services throughout Southborough,” said Jeff Hazelwood, a Principle at CTA Construction. “Our team is focused on completing a facility that every police officer and firefighter will be proud to operate from.”

Southborough officials selected CTA Construction as the general contractor for the complex after a competitive bidding process that highlighted the firm’s extensive experience in municipal construction projects throughout Massachusetts, including public safety complexes in other communities. CTA most recently completed construction of a similar facility in Scituate, MA in 2017.

The planned Southborough joint-department public safety building is part of a growing national trend in how new facilities are managed for police and fire departments. The initial impetus to create shared complexes came due to financial pressures on cities and towns following the Great Recession. However, the drive to save taxpayer dollars has actually improved responses to 911 calls as well, and led to better all-around cooperation between local police and fire departments. Upon the completion of this facility, Southborough is expected to see the benefits now enjoyed by many cities and towns across the country that have adopted this new model for their emergency services.

The new public safety building will replace the facilities currently used by the police and fire departments, both of which have outgrown their existing setups. The police department is operating out of Town Hall and the former Peters High School Annex, while the fire department is headquartered in a station built 40 years ago by firefighters themselves.

When completed, the Southborough Public Safety Complex will be the largest non-school construction project in the town.