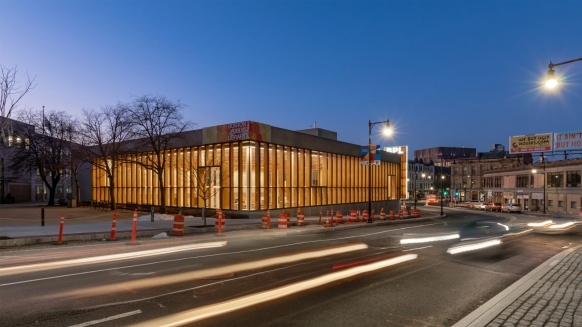 Situated in Nubian Square in the center of Boston's historic Black community, the Roxbury Branch of the Boston Public Library was originally designed in 1978 by Kallmann and McKinnell Architects. Envisioned as an introverted Brutalist building, the library's concrete and glass block walls insulated it from the neighborhood and enforced minimal connections between the library and the municipal programs on the upper floors. Following a detailed programming study that espoused new goals for the library and its patrons, the 2020 renovation transformed the library into a warm and inviting community hub accessible to everyone.

Following the study, the team began with exterior signage improvements in 2013 and continued through the library's renovation. In the building's redesign, the opaque facade was replaced with expanses of clear glass that foster much deeper connections with the surrounding community. Much of the library is wrapped in a handsome and innovative timber and glass curtain wall that helps reduce energy consumption while filtering the natural light entering the library's grand reading room. The library's front door was relocated to face Nubian Square’s reconstructed plaza, which features enhanced pedestrian crossings and new, green infrastructure. The entrance is capped with a new entry canopy and garden that doubles as a gathering spot thanks to its terracotta sunshade.

Much of the library is wrapped in a handsome and innovative timber and glass curtain wall that helps reduce energy consumption while filtering the natural light entering the library's grand reading room.
Inside, the library's program has been expanded to include the entire volume of the existing building. Interior glass walls and portions of the second floor were removed to draw in natural light while amplifying the drama of the original design. The library's African American collection is featured in a new double-height space adjacent to the entry, and a new open staircase and elevator lead to additional second-floor program spaces, including a meeting room and nutrition lab.

The reading room's scale was preserved, but the team relocated its exposed ducts, lights, and signage to broaden the views. The existing exposed concrete has been softened by wood accents, such as bookshelves and ceiling baffles, that modulate both light and acoustics. The room is split into discrete age-appropriate zones; signage and repeated color themes assist with wayfinding. Playful elements, including a custom mural of a storybook landscape replete with reading animals and insects, spark joy for learning in the children's area. The layout of the area's stacks invites young readers to explore the maze-like arrangement.

No longer a drab and imposing bunker, the Roxbury Branch fully engages the community it serves. The new library's transparency, warmth, and accessibility now reveal the vibrancy that always existed inside the previous facility, from its lively chess scene to the regular concerts held in its community room.

The complete article is here: https://www.aia.org/showcases/6392537-roxbury-branch-of-the-boston-publi...