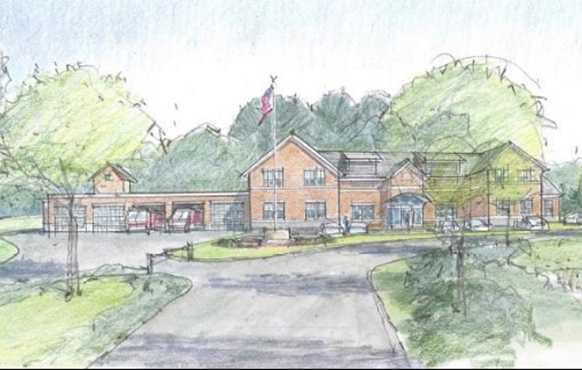 CTA In the News: The following article appeared on the Metrowest Daily News online October 12, 2018:

SOUTHBOROUGH — Police Chief Ken Paulhus left town for a few days last week and was surprised when he returned and drove by the place where they are building the new combined police and fire stations. “I cannot believe the work that’s been done,” he said.

A small — but cheerful — group of town officials, construction workers and residents gathered at the complex Friday morning to watch the installation of a ceremonial beam. Many had signed the white beam during the town’s annual Heritage Day on Monday.

“Obviously, there is a long way to go before we are complete,” said Selectman Brian Shea. “It is very nice to see after all the work done by so many people.”

In March 2017, Special Town Meeting overwhelmingly approved borrowing $22.6 million to construct the 35,500-square-foot building, which will house the police and fire departments.

The town bought the St. Mark’s Golf Course at a reduced price of $4.9 million after agreeing to swap land where the current police and fire stations are on Main Street. The course has since been renamed the Southborough Golf Club.

The public safety building will use no more than six acres of the course and a permanent conservation restriction will be placed on the remaining land — approximately 90 percent of the property.

Paulhus thanked the town’s taxpayers for supporting the project.

“I remember when that vote went through and everybody applauded and I’ll distinctly remember that when I am in retirement somewhere,” he said.

“Now that they are starting to go vertical, it’s moving very quickly,” he said.

Fire Chief Joe Mauro, who will retire in March after 37 years with the department, got the last word.

“It has been amazing to take a look at this building going up,” he said. “I am not going to see it, but hopefully everyone will enjoy it and it will serve the town well for many years.”

He’s impressed with the design.

“I know police will enjoy it coming out of the building they are in; I’m sure our guys will, too,” Mauro said. “Take a look at the apparatus bay, there will be a little bit more movement in there.”

Contractor CTA Construction of Waltham is expected to finish most of the work by July.

The full article can be seen here: https://www.metrowestdailynews.com/news/20181012/southborough-celebrates...