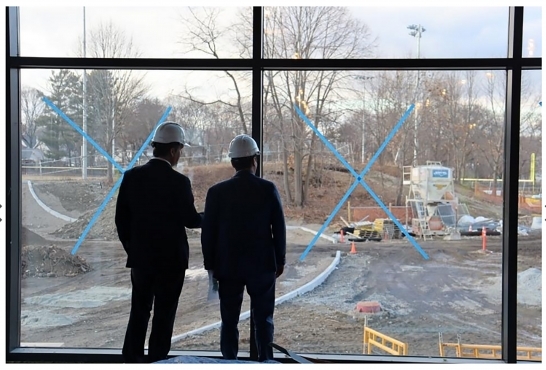 Below is an update on construction of the new Tufts Library in Weymouth, MA.

The following appeared in Wicked Local.com on February 7, 2020 and can be found here: https://weymouth.wickedlocal.com/news/20200207/nothing-but-praise-for-ne...

A $33 million new Tufts Library under construction received high praise from local state legislators for meeting Weymouth’s goal of having a modern facility.

O’Connor said the two-and-a-half story building would be “an absolute gem on the entire South Shore.

“While taking the tour, you can see the vision that the mayor and the town had,” said O’Connor. “It will be a place where individuals can go to expand their learning abilities.”

Murphy said in a Facebook post that the new library would serve as a “centerpiece of our community for many years to come.

“Working with local officials, Mayor (Robert) Hedlund, town council and library board volunteers, and the staff at the new Tufts Library, (it) will become a reality,” said Murphy.

The Weymouth News could not reach Murphy for further comment.

O’Connor said he worked with Murphy to secure a $12 million grant from the state Board of Library Commissioners in 2017 to aid in the construction of the 50,000 square-foot building.

“It was a very competitive process,” he said. “We were able to present a need in Weymouth, and we worked in a bipartisan fashion to get things done.”

O’Connor said the project was important to him because he grew up a short distance from the construction site.

“It is on top of the street that I used to ride my bike on to go to Weston Park to play pickup baseball games,” he said. “It was a huge part of my childhood, and I want other people to have the same opportunity.”

MacLean said O’Connor and Murphy played a critical role in securing the grant.

“It was nice to show them the physical manifestation of their support for getting state money and the use of the town’s money,” MacLean said.

MacLean said the library construction should be done in June.

O’Connor said constructing a new library is the town’s best option because the former 54-year-old structure was “really tired.”

The previous library needed a new roof, an updated heating-ventilation-air-conditioning system, an elevator, and modern internet technology which would have cost millions, according to a building review committee.

The committee recommended constructing a new library and town council approved a $33 million bond to finance the construction of a 50,000 square-foot facility at Hedlund’s request in October 2017.

O’Connor said it was awesome to see the library construction is proceeding on schedule.

“The children’s section will be enormous,” he said. “You can see work being started on a new playground outside.”

O’Connor said the construction crews salvaged the former library’s Weymouth Granite base to build an outdoor amphitheater for community or theatrical performing groups to host gatherings.

“The steps to the main entrance of the new library will be made of Weymouth Granite,” he said.

O’Connor said the new Tufts would complement a $1.5 million renovation of Weston Park, which was completed last year in addition to ongoing building projects in Weymouth Landing.

“It is all coming together at the same time,” he said.

“Everything about this project has been smooth,” he said. “There was no need for a tax levy (increase) to get this done. The project is turning a corner, and you can see it coming to shape. This will be a project everybody in the town should be proud of.”

The complete article can be found here: https://weymouth.wickedlocal.com/news/20200207/nothing-but-praise-for-ne...