In the news: New library among "best in the state" 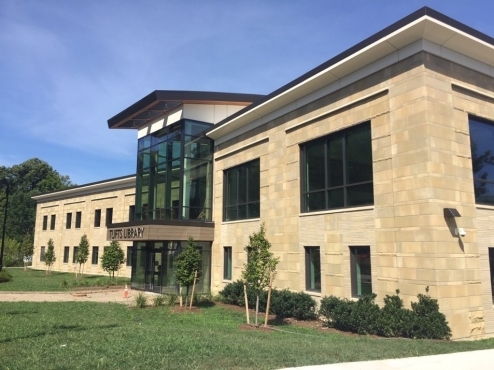 The following was published by the Patriot Ledger on September 2, 2020. The full article can be accessed here:  https://www.patriotledger.com/news/20200902/new-library-among-best-in-state

New library among ‘best in the state’

The Tufts Library is on track to open this month.

WEYMOUTH — After years of planning and construction, dozens of meetings for community input and some hiccups caused by a global pandemic, the new 50,000-square-foot Tufts Library on Broad Street is set to open at the end of the month.

With a half-dozen meeting rooms, a digital media lab with high-tech editing software, a local history collection, a quiet reading room and spaces specifically designed for children, tweens and teenagers, the Tufts Library will offer something to everyone in the community.

“This is one of the best libraries in the state,” Library Services director Robert MacLean said Tuesday as crews continued to build book shelves, add landscaping and make various finishing touches inside the two-story building.

A stroll around the bright new library reveals well-thought-out details that MacLean said will make the many different spaces user-friendly and comfortable. The programming room in the children’s area has a special washable floor for arts and crafts, for example, and there is a comfort room for nursing mothers and those with other needs.

Whether it’s a quiet room to study, a large room for a community meeting or a place for children to interact and learn, the library has something for people of all ages.

The children’s room — the “children’s empire” as MacLean fondly referred to it — is two-and-a-half times larger than in the old library. MacLean said one of the best features is the fact there is a space dedicated to tweens, children between ages 9 and 12. The space offers two study rooms, eight computers and other features.

The library also offers a space meant for teenagers, with a study room, tables and a variety of seating for everything from homework to gaming.

“This is night and day compared to the teen space at the old Tufts,” MacLean said. “In here, they will feel welcomed and appreciated.”

The price tag for the project — including architectural and project management fees, demolition, construction, furnishings and technology — is $33 million.

The state board of library commissioners chose the Tufts Library for the Massachusetts Public Library Construction Program in July 2017, and gave the town $12.1 million for the project. The grant represents about 41 percent of the eligible costs, not including temporary library space, furniture, computers, landscaping, walkways and parking lots.

The old, 33,000-square-foot Tufts Library was built in 1965 and would have required millions of dollars to update systems and remove asbestos. Officials say the layout was outdated and the library no longer met the needs of the public.

After taking office in 2016, Hedlund said it quickly became clear that the town needed to do something about Tufts Library. He said the new library is exciting, especially since the town was able to finance it without requiring a property tax override.

“The fact we could do this without increasing our debt service made it worth pursuing,” he said.

“I have a huge level of confidence that Rob and his staff will treat this building with love and care,” he said. “This truly is a labor of love.”Hedlund said maintenance and upkeep is always a concern when making big capital investments, but he knows the new Tufts will be well cared for.

From inside the building, large windows offer views of a picnic area, a garden of flowers that attract butterflies and a amphitheater made of Weymouth granite from the old library, which will eventually host summer concerts and other programming. The library also overlooks Weston Park and a new playground with accessibility features and some agility components.

The library was originally set to open by the end of June, but a stop-work order due to the pandemic pushed construction back about six weeks. MacLean said the project is still on budget despite the delays.

MacLean said the library will open for normal hours of operation near the end of the month, though patrons will be limited to 30 minutes inside the library and there won’t be any programming due to the COVID-19 pandemic. Patrons will enter from the side of the building and exit at the front, where a traffic counter will help keep track of how many people are inside.

“Unfortunately, people won’t get the full experience of what it is meant to be right away,” he said.